Book 2 in the Duchess in Love series

The Woman
Lady Henrietta Maclellan longs for the romantic swirl of a London season. But as a rusticating country maiden, she has always kept her sensuous nature firmly under wraps — until she meets Simon Darby. Simon makes her want to whisper promises late at night, exchange kisses on a balcony, receive illicit love notes. So Henrietta lets her imagination soar and writes…

The Letter
A very steamy love letter that becomes shockingly public. Everyone supposes that he has written it to her, but the truth hardly matters in the face of the scandal to come if they don’t marry at once. But nothing has quite prepared Henrietta for the pure sensuality of…

The Man
Simon has vowed he will never turn himself into a fool over a woman. So, while debutantes swoon as he disdainfully strides past the lovely ladies of the ton, he ignores them all… until Henrietta. Could it be possible that he has been the foolish one all along? 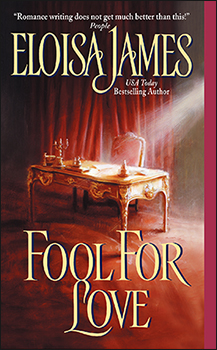 “This spry story will seduce readers with its wily wit and distinctive characters.”

“This spry story will seduce readers with its wily wit and distinctive characters.”

Spoiler Alert for Duchess in Love!
For those of you who read Duchess In Love: Esme Rawlings’s husband is dead. But she is carrying a child, and the sex of that child will determine whether her husband’s nephew, Simon Darby, inherits the Rawlings estate. So Darby retreats to the Rawlings estate, where Esme is in confinement, to wait out his aunt’s pregnancy and, perhaps, just perhaps, to win himself an heiress…

In which an elegant London gentleman meets a lady from the country… and both are surprised.

“Now that was foolish,” Lady Henrietta said in a clear voice.

“Blowing Lucy Aiken down the wind,” she said promptly. “Lucy is a remarkably sweet girl who would be quite a good mother to your sisters. She has a passion for London, and will be easily satisfied by living there and riding in the Row a few times a week. You couldn’t do better than marry her.”

Darby blinked. Didn’t she know that young ladies did not discuss other ladies’ marriageable prospects in polite company? In other words, in the presence of a man?

Before he thought it through, he said, “I believe I am not quite used to the idea of assessing women as marrigeable commodities.” That made him sound insufferably conceited, so he added: “Of course, the assessment occurs on both sides.”

“Perhaps your dismay is due to your gender. We women are, by necessity, quite familiar with the concept of the marriage market. I suspect that the problem is not that you didn’t see yourself as part of that market previously. It’s that you are used to being an object of great worth, and now your aunt’s happy condition has made you slightly – but only slightly, Mr. Darby – more affordable.”

There was nothing mocking in her eyes, actually. And it made sense that she thought he needed to marry an heiress.

“I suppose that’s it,” he said. He finished his Madeira. “You are remarkably frank, Lady Henrietta.” He could never remember being labeled affordable in the past.

“I’m afraid it’s a fault of mine,” she agreed, looking utterly unrepentant. “Perhaps it’s a facet of small-town life. One needn’t obfuscate quite as much.”

“Never having spent any time in the country,” Darby said, “I can hardly disagree with you. I gather you heard the rumor that I have made this particular visit in order to wait out my aunt’s confinement and determine whether I am my uncle’s heir?”

Darby jiggled his wineglass, watching the last few drops of ruby liquid chase about the bottom. “I believe you would find my answer truly shocking, Lady Henrietta.”

“I doubt it,” she said tranquilly. “A small village contains just as much greed as a large city.”

He looked up, a faint smile curling the edge of his mouth. “Now I am both affordable and greedy?”

“I did not say that. And I didn’t mean it either. I think that if you approached Lucy again, you would find her quite pleased to talk to you,” Henrietta replied. “She doesn’t really see you as a commodity, Mr. Darby. Lucy is merely young. But I think she was quite taken with your symmetry.”

He looked at her sharply, and there was a just a trace of laughter in her eyes.

The wine was set down before him and he took a sip, rolled it like potent fire on his tongue. Since she was bold in her speech, she presumably would not be shocked by the same bluntness.

“So why are you not on the market, Lady Henrietta Maclellan?” he asked deliberately. “I have watched you talk to old ladies, and young ladies, but no gentlemen.”

“Not so!” she protested. “Lord Durgiss and I had a long conversation about his hedges, and –“

“Is that Lord Durgiss?” He nodded toward a stout peer dressed in a florid satin waistcoat. “The man wearing a violet waistcoat?”

“No, that is Lord Durgiss’s son, Frederick. Frederick does have dreadful taste in waistcoasts, does he not? You see, he fancies himself the next Lord Byron. He’s been writing perfectly appalling verse to my sister Imogen for the last month or so.”

“And why isn’t he writing verse to you? You are far more symmetrical than is Lucy Aiken, for all her thousands.” He leaned just a trifle closer and held her eyes for a moment before she dropped them. “You are quite exquisite. Your hair is truly out of the ordinary, and yet here you are, in a rural backwater.”

Deliberately he reached out and picked up her hand. It was tiny, dwarfed by his own. In the back of his mind he realized that his heart was pounding, a ridiculous response to nothing more than a beautiful face and a fringe of black lashes.

She swallowed. Her throat rippled. God, she even had a lovely throat.

“Because I am not symmetrical,” she said finally. She took a drink from her glass of champagne, looking at the bubbles rather than at him.

“I cannot have children.” She raised her head and looked at him. Her eyes were a navy blue color and perfectly set apart. She was like the most gorgeous mathematical theorem he had ever seen: devastatingly simple on the outside and fascinatingly complicated on the inside.

He hadn’t really listened to what she said. “You can’t – what?”

“Have children,” she said painstakingly, just as if this was the kind of conversation that people often had with strangers.

What the devil was he supposed to say to that? He had never heard a gentlewoman discuss her plumbing in company.

Her eyes were still on his face, and they had that slightly mocking edge in them again. She drew her hand away. “I apologize if I horrified you by my bluntness, Mr. Darby. I’m afraid that everyone is aware that you have to marry an heiress in order to support those lovely sisters of yours. As it happens, I am an heiress but, under the circumstances, I am not active in the marketplace.”

He literally had no idea what she meant.

She finished her champagne and put it down with a little click. Her smile was kind. “I would not wish you to labor under the misapprehension that I might join the fray and purchase you myself.”

He didn’t even laugh until some time after she walked away.

Fool For Love is available in the following formats:

Fool For Love is Book 2 in the Duchess in Love series.