Book 1 in the Duchess in Love series

A Duke in Retreat
Gina was forced into marriage with the Duke of Girton at an age when she’d have been better off in a schoolroom than a ballroom. Directly after the ceremony her handsome spouse promptly fled to the continent, leaving the marriage unconsummated and Gina quite indignant.

A Lady in the Middle
Now, she is one of the most well-known ladies in London … living on the edge of scandal — desired by many men, but resisting giving herself to any one.

A Duchess in Love
Finally, Camden, the Duke of Girton, has returned home, to discover that his naïve bride has blossomed into the toast of the ton. Which leaves Cam in the most uncomfortable position of discovering that he has the bad manners to be falling in love — with his own wife! 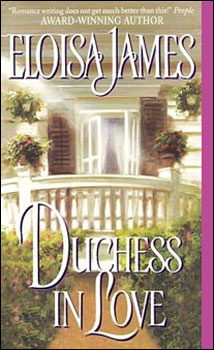 Cam and Gina were married at a very young age (eighteen and twelve, respectively). The evening of their wedding, Cam jumped out the window and fled to Greece, where he’s lived ever since, sculpting marble. At least, until Gina writes him to say that she’s fallen in love and would he please return home and annul their marriage. But when he sees Gina, he feels entirely differently about the annulment…

“What do you use for light in Greece?”

“Candles…the sun….the skin of a beautiful woman.” Cam bent down and kissed Gina’s cheek, so swiftly that she hardly felt the imprint of his lips.

Gina looked down at her hands for a moment. She’d managed to get an ink stain on her wrist. “Cam,” she said quietly, “we must stop this — behavior.”

He turned around from where he was standing, surveying Lady Troubridge’s books. “What behavior?”

“Ah, but I like to kiss you,” said her reprobate husband.

Gina shivered. That would result in a lonely bed, tending to the estate manager’s letters while her husband bathed in the Greek ocean. She looked away, tightening her lips against the sight of him.

But he was moving, pulling her to her feet. “Gina,” he said, and his voice was deep and full of passion. He kissed just at the corner of her mouth, and her whole body trembled. “Gina,” he said. “May I accompany you to your chamber?”

She trembled in his hands like a bird caught on its first flight. He trailed kisses down her high cheekbones. “I want you,” he said, in a voice burnished and dark, a voice that spoke of laughter, irresponsibility, naked statues, and the Greek sun.

It was all wound up in Gina’s mind: the statues, the naked women, his mistress Marissa waiting for him—

She pushed his hands away. Her cheeks were flushed, her lips trembling, but her voice was firm. “That is not a good idea.”

His face became instantly guarded and casual. “Why not? We could both find pleasure without anyone being the wiser.”

Her eyes were scornful. “You would like to take pleasure, and leave without injury. That’s just like you, Cam.”

“I don’t see anything wrong with it.” He fought to keep his temper.

“Perhaps there isn’t anything wrong,” she said, “from your point of view.”

“That’s quite a little moralistic statement.” His voice was cruelly polite. “May I remind you, lady wife, that I have had every opportunity, and legal right, to take your body wherever I please? But I have chosen to ignore the signs of your oh-so-willing character, although I have had the distinct impression—”

She interrupted. Duchesses never interrupt, but this one was losing all claims to dignity. She was rosy with pure embarrassment. “I enjoy kissing you.” Her voice shook. “I enjoy the way you, the way you…”

He stared at her, silenced by her truthfulness.

“But you’re just talking about pleasure, not anything else,” she continued, meeting his eyes.

“What more do you want?” he asked, genuinely bewildered.

“I am twenty-three years old. I wanted to live with my husband and have children together, which is not an unreasonable request. What you offer is pleasure alone. You are too good at ignoring unpleasant truths, such as the fact that you’ve had a wife sitting at home for twelve years while you dallied with your Greek mistress.”

Cam frowned. “You never said that you cared about where I was. You never asked me to come home until you requested an annulment.”

He just looked at her, jaw set.

“I believe that marrying is not in your nature.”

Cam had always said that he wasn’t the marrying kind. He had a joke of being the earliest-married among the never-meant-to-be-married. But he didn’t like the prickling feeling it gave him when Gina pointed out his unsuitability.

He rallied quickly, the veteran of a thousand unpleasant family battles. “None of this started with a question of marriage,” he remarked, deliberately pulling down his sleeves and readjusting his jacket. “It is merely a question of desire. Since you are honest, I shall be as well. I want you, Gina.”

He walked a step closer and stared down at her. “I want to plunge inside you.”

She looked away to escape the intensity in his black eyes. He forced her chin back up. “And you want the same from me.” She didn’t answer, unable to balance the scorching glow in her belly and the shrinking humiliation of hearing such a thing said out loud.

“Desire is a normal, human emotion,” he said. “I can certainly understand if you would rather experience it with your future husband than with me.”

It didn’t take a genius to realize that she and Sebastian would never share anything of the sort.

“But there is no need to insult me. As an eighteen-year-old, I did not indicate a wish to marry you, Gina. If I ever have a real wife, a wife I myself chose, I will not leave her for twelve years, nor take a mistress, for that matter. It is not fair to criticize me for breaking vows dictated by my father.”

He let his hand drop.

She felt a wave of shame so profound it was as if she’d been dipped in hot water. “I’m sorry,” she whispered.

“There’s nothing to be sorry for. We’re both victims of my father, two of the many.”

Gina looked at him and knew, in that instant, that she loved him. He stood in the last rays of dying sunlight and there was chalk in his hair. He stood smiling, that lopsided smile of his, and she wanted nothing more than to hold out her arms and say: Come. Come kiss me. Come love me. Take me to your chamber.

The words wavered on her lips, but she couldn’t say them.

He met her eyes. “Marissa is married to a nice fisherman,” he said. “She was my mistress, but I danced at her wedding some three years ago. We had an enjoyable time but our friendship was of no great consequence to either of us.”

“Oh,” she breathed. And she realized that what mattered was love, her love for him. Not the future: the present.

He had her hands again. “I have no right to ask. But may I … may we …” He didn’t seem to know what he meant or how to phrase it. He cleared his throat and put out his elbow. “I will be a sometime husband, Gina. But I would like to be yours. May I escort you to your chambers?”

“I believe you may,” she said. Her voice was faint but clear.

Cam looked at her for a moment and then bent his head and kissed her. Gina’s whole body sang at his touch. He turned and wrapped an arm around her waist, and they walked toward the library doors.

Duchess in Love is available in the following formats: