When the Duke Returns

Book 4 in the Desperate Duchesses, the Original Six series

The Duchess of Cosway yearns for a man she has never met . . . her husband.

Married by proxy as a child, Lady Isidore has spent years fending off lecherous suitors while longing for her husband, Simeon Jermyn, the Duke of Cosway, to return.

But when the prodigal duke finally returns, ready to take on his obligations, he finds the woman they call his wife too ravishing, too headstrong, too sensual to be a proper duchess. But Isidore will not give up her claim to the handsome duke without a fight. 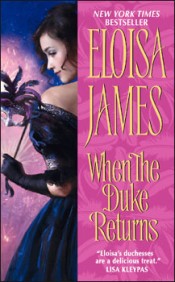 But all the diamonds in the world couldn’t stop the cold fear that gripped Isidore’s heart when she descended the stairs some time later. She was going to meet her husband. For the first time.

But she stopped herself before she began lopping off his limbs. Whatever he was and however he looked, she would finally have a real husband. She could have children. She could be a real duchess, rather than a woman known to some as the Duchess of Cosway, and others as Lady Del’Fino. She’d longed for this event for years.

The thought sustained her as she strolled into Lord Strange’s sitting room. There was an vivid moment of silence, as the gentlemen in the room took stock of Isidore – or perhaps more precisely, Isidore’s tiny bodice — followed by such a concerted rush in her direction that she actually flinched. No duke was among them. Cosway had yet to arrive.

Men were men, she kept telling herself whenever she felt a pulse of nervousness about her husband. French or English, explorer or juggler, the silver gown brought them all to their knees.

But the sensuality of the gown felt different this time. In the past, she’d ignored men who gaped at her bosom. Now she suddenly realized that a husband’s response involved more than just a lustful gaze. To put it bluntly, Cosway had every right to drag her straight up the stairs.

Her friend Harriet took one look at her and pulled her out into of the sitting room – when it happened.

The front door was open and snow was blowing in. The butler was saying something about unseasonably cold weather, and then…

A man laughed, and in that instant, Isidore knew. It was Cosway. She could only see his back: he was enormous, wrapped in a greatcoat with a fur hat. She panicked. “I have to go upstairs!” she whispered, stepping backwards, nearly tripping in her eagerness to flee.

And it was. The great mountain of a man turned and then, as if there were no one else in the entry, his eyes met hers and he recognized her. He didn’t even glance at her dress, just met her eyes. Isidore gulped.

Black hair tumbled over his collar as he pulled off his hat and handed it to a butler. But he didn’t take his eyes from hers. His skin looked warm, a honey-dark color that no one could call weather-beaten.

Without saying a word he swept into a deep bow. Isidore’s lips parted to say – what? – as she watched him bow and then curtsied, a moment too late. She felt as if she were caught in the acts of the play. He was –

If Cosway was Mark Anthony, Cleopatra would have fallen at his feet, rather than the other way around. He didn’t look like an English duke. He didn’t have powdered hair, or a cravat, or even a waistcoat. He looked untamed.

“My duchess, I presume,” he said, catching her hand and kissing it.

Isidore managed to pull herself together enough to introduce him to Harriet, but her mind was reeling. Somehow in all her imaginings, she’d forgotten to imagine – a man.

Not a nobleman, with delicate fingernails, and powered hair. Not a ruffian, like many of the men attending Lord Strange’s houseparty. But a man who moved easily, like a lion, who seems to swallow all the air in the entry, whose eyes ranged over her face with a sense of ownership… Her heart was beating so quickly that she’d couldn’t hear anything.

He wasn’t one-legged, or toothless. He was probably one of the most beautiful men she’d ever met. She had lost track of the conversation.

“The duchess and I leave in the morning,” he was telling the butler.

In the morning? Isidore was gripped by a sense of fear so great that she couldn’t imagine even walking to the carriage. If she were utterly honest, she had imagined a man who would be slavishly grateful to discover that his wife was so beautiful. But now…

She thought she had all the power. She didn’t.

She had to take command. Cleopatra, she thought desperately. Cleopatra would not allow herself to be transported like a piece of luggage.

“I myself do not plan to leave for several days,” she said, smiling at him even though her heart was thundering in her chest.

It wasn’t just that Cosway wore no cravat. He wore a gorgeous jacket of pale blue, but it was open straight down the front. Long cuffs fell over his hands, the wrist button undone. He looked as if he were ready for bed. The very thought stoked her nerves.

He took her hand in his, and raised it to his lips again. Isidore watched his lips touch her gloves and felt herself shiver.

“Ah, but sweetheart,” he said, “I am all eagerness for our wedding.”

For a moment, Isidore just thrilled to the sound of that sweetheart, to the way his eyes warmed her, to the secret shiver she felt in her legs.

But then she realized what he had said. “We are wed,” she pointed out, withdrawing her hand from his. He looked amused, so she added: “You may have ignored the fact for years, but I assure you that it is true.”

That’s where it all went wrong.

It started there…and it ended with Isidore alone in a bedchamber that night.

Not to mention, Isidore, still a virgin, on her way to London the next day.

He might as well have labeled her, the way they did trunks.

Isidore, property of the duke.

When the Duke Returns is available in the following formats:

When the Duke Returns is Book 4 in the Desperate Duchesses, the Original Six series.