Book 3 in the Pleasures series

Gabrielle Jerningham cherishes the portrait of her betrothed, the perfect Peter Dewland…until she meets his commanding older brother Quill. But it is Peter to whom she has been promised. And how can she possibly transform her voluptuous, outspoken self into the poised gentlewoman Peter requires?

When Gabby’s shocking décolletage plunges to her waist at her first ball, Peter is humiliated. But Quill comes to the rescue, to the peril of his heart. An accident years before has left Quill plagued by headaches–the kind that grows more excruciating with strenuous exercise. Needless to say, this hardly bodes well for siring progeny. But the very sight of Gabby leaves Quill breathless. One forbidden kiss and Quill vows to have her, headaches–and Peter–be damned! But it will take a clever man–and a cleverer woman–to turn the tables on propriety and find their way to true love… 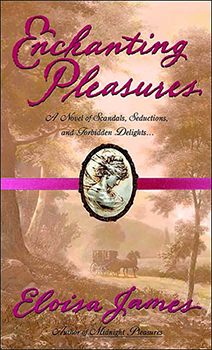 See all ordering options, including international, audio , and more
↓

“Her characters are hilarious, tender, loving, and sensuous, and rolled into some delightfully delicious plots that captivate and titillate you to your toes!”

~ The Belles & Beaux of Romance

Quill pressed his lips together. Better to get the difficult matter out of the way first. “I’m pining to marry you,” he said.

The scowl disappeared from Gabby’s face, replaced by a look of utter astonishment.

“I’m burning and pining to marry you,” Quill said. Then he remembered the whole line. “Burning, pining and perishing,” he added.

There was a moment of silence while Quill prepared his next lines. This wasn’t as hard as he had anticipated.

“When I saw you on the dock, your breath perfumed the hair.”

“Sorry,” Quill corrected himself. “Air! Air. When I first saw you on the dock, your breath perfumed the air. And then I discovered that your eyes were like spangled stars.” He was taking a few liberties with Shakespeare, but he liked his version better.

Gabby still hadn’t said anything, so Quill walked over and stood just before her. He looked down at her downcast head. “Everything I see about you is sacred and sweet.”

Quill took Gabby’s chin in his hand and forced her head up. It was evident in a second that his plan had gone awry. Gabby was shaking all over like a blancmange. It didn’t take a lubbox to realize that she was nearly killing herself trying to restrain her laughter.

“Forgive me,” Gabby said in a choked tone, “I…I —” She gave up, breaking into a gloriously husky shout of laughter.

Heat rushed up Quill’s legs and into his chest. He had the impulse to violently shake the woman before him. It was all her fault that he had behaved like a nodcock. Ice replaced the embarrassment, and he stepped back. He began turning over cool, mocking phrases, shaping a comment that would make it absolutely clear that he, Erskine Dewland, had never in his life compared a woman’s eyes to stars.

But then he remembered. He had promised Peter that he would marry Gabby. He couldn’t snub her.

Besides this was all gibberish, nothing more than a silly fable to make a romantic woman marry him. He needn’t feel embarrassed. It was all lies, after all. Not for nothing had Quill attended Drury Lane when the great actor, John Philip Kemble, was performing. If Kemble could do it, so could he. Gabby was still giggling to herself. Quill reached out and dragged the minx into his arms.

She fit there as if she were designed to melt against him, as if every one of her curves was matched by a hollow in him.

She stopped giggling but her voice was still husky with laughter. “Quill?”

“Gabby.” He swooped, bending her over his arm with Kemble’s own dramatic flair.

His lips were everything his words had not been: carnal and dangerous, sure in their approach, commanding her attention.

Gabby twisted in his hands, trying to pull away from the undertow of desire. She didn’t want this again. Not the drugging feeling that turned her stomach into liquid fire, sent her up against Quill’s body, trembling and making pleading noises. It was morning. It was indecent to feel this way, even at night. Especially –

But he wouldn’t let her go. His large hands held her against his muscled thighs. He pressed her indignant eyes shut with his lips, and then kissed his way back to her mouth.

Despite herself, Gabby stopped pulling away and shuddered closer, her arms coming up around his neck, her mouth opening to his demands.

And there was again: the burning, the loss of breath in her chest, the sweet fire in her chest, lower, in her stomach, lower… Gabby’s tongue met Quill’s, her heart speeding to a beat that sent a rhythm through her entire body.

“I burn,” Quill said, tearing his mouth away from hers. He was unable to keep his hands steady – or keep them in gentlemanly bounds. He ran his fingers down her neck and then ruthlessly pulled down the delicate muslin of her morning gown.

Gabby gasped but didn’t protest. Her little cap sleeve slid without resistance to her elbow and her chemise followed.

Quill’s voice was a low rumble, dark with passionate need. “I burn, Gabby. I pine, I perish.” He kissed the sweet cream of her shoulder, his hands tracing a bold demand. His lips drifted to her neck, breathed the words against her skin. “I am burning, Gabby.”

She sighed as his palm rounded her breast, sending a wave of tiny shivers down her body.

“You must…You must.” His voice died against her skin and was replaced by silence.

Quill raised his head to find Gabby speechless, perhaps for the first time in her life. He kissed her lips gently, a butterfly kiss, and then took her face in his large hands, holding its perfect oval. His fingers trailed a caress over her curved eyebrows, down the sweep of her high cheekbones. With his hands, he marveled. With his fingers, he sang a poem, trailing over her lips. Gabby’s eyes were a brandy golden color that a star would weep to call its own. “What stars do spangle heaven with such beauty,” Quill said quietly, “As those two eyes become that heavenly face?”

Gabby’s hands came up to cover his. She met his eyes. “That’s not fair,” she whispered. “Bianca hasn’t a decent line in the whole play.”

“Sod the play.” Quill pulled her into his arms again and spoke against her mouth. “I want you, Gabby. His hand was on the sweet curve of her bottom, pulling her against his hard body. “Oh God, I can’t live without you. I am perishing.”

Gabby heard the rough plea in his voice and gave a little sob, twisting up to put her mouth against his lips. “Kiss me, Quill. Kiss me again.”

Enchanting Pleasures is available in the following formats:

Enchanting Pleasures is Book 3 in the Pleasures series.